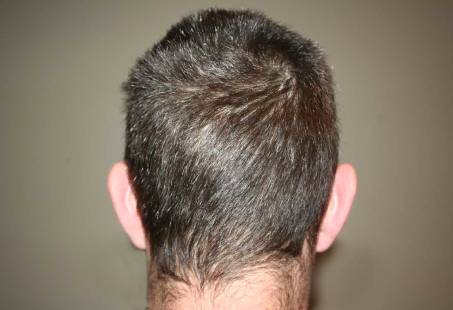 A cowlick can make your every day a bad hair day. It is one of those things on your scalp that just doesn’t cooperate with the others. And the result is an ever-present bump of hair that annoyingly tries to stand out.

The way that cowlick appears also ends up ringing alarm bells in many people. More scalp skin shows through areas where a cowlick is present. But does that mean you’re balding? If not, how do you tell the difference between cowlick and pattern hair loss?

What Is A Cowlick?

Cowlicks refer to hair strands that grow in the opposite direction of the prevalent hair growth pattern. This results in the hair either sticking out or lying flat (in the opposite direction). Usually, cowlicks can be seen around the hair whorls, which are clockwise or counterclockwise circular patterns on the crown region of the scalp. However, cowlicks can also occur around the hairline.

One study published in Teratology found that hair whorls that were present on the front of the head had a cowlick in 7% of the cases. Cowlicks are quite common and can be seen in both men and women. It is also possible for you to have more than one cowlick.

As far as the origins of the term “cowlick” are concerned, it dates back to the 16th century and is so-called because it looks like the hair on the head was licked by a cow (cows do tend to lick their calves, leaving the messing up the hair pattern on their hides).

What Causes A Cowlick?

Your genetics can influence how your hair grows, its texture (curly, wavy, straight) and its thickness. So, it is possible that those who have a cowlick may have a genetic predisposition to it. Your parents or siblings may also have cowlicks if you do. And since this is something that you have since birth, you can’t change the direction in which the cowlick hair grows.

Other than your genetics, an injury to the head or surgery can also result in this type of hair growth. The type of hair you have can also influence how prominent the cowlick is. For instance, curly hair naturally grows out, not down. And since cowlick hair also tends to stand out so it won’t be noticeable.

This may also be the case for those who have thicker hair. Thick hair provides more coverage, so not a lot of the scalp skin is exposed. You might be able to see it if you completely shave your hair. On the other hand, those who have straight, fine hair may have more noticeable cowlicks.

How To Get Rid Of A Cowlick?

If you want to get rid of a cowlick entirely, you need to change the direction of the growth of the hair follicles, and that’s only possible through hair transplant surgery. Surgeons can control the direction in which the hair grows when they’re implanting the follicles. They follow the natural hair pattern for this.

It is also possible for you to get rid of your cowlick entirely by having the hair follicles rearranged. The results will be permanent. However, it is very important that you find a trained and experienced surgeon for this procedure. If done wrong, a hair transplant can end up giving you a cowlick.

How To Fix A Cowlick at Home?

Since a cowlick isn’t something that you can entirely get rid of (unless you undergo hair surgery), there are different things that you can do to fix it.

One way to make the cowlick (literally) bend to your wishes is to give it some heat. Air can be directed to the cowlick using a nozzle, and you can style it using a hairbrush. Ideally, you should do this while looking in a mirror.

An alternative to blow-drying is to use an iron control rod. It comes with a heat-resistant brush that allows you to heat up the roots of the hair without burning the scalp. So, this can also help you with your cowlick. Before doing any of this, make sure to brush your cowlick in the direction you want. Brushing it in place will ease the process a little.

Grow Your Hair Out

Cowlicks can also be helped by the natural force of gravity. For that, you need to grow your hair out because that will increase its weight. Once the hair strand (that’s a part of the cowlick) becomes weightier, it will naturally bend down and make the cowlick less noticeable. It is one of the simplest things that you can do to fix a cowlick.

Use The Right Hair Care Products

While a gel can help hold the cowlick down, you can also consider using a pomade. Although a pomade isn’t as strong as a gel. If your cowlick is too much, a gel would be the better option. You can also use a hair wax, which looks less greasy. Other than that, you can also put your cowlick in place by less shampooing and more conditioning. The latter weighs the hair down by adding moisture (although don’t use too much of it as that’s also bad for hair).

Get A Suitable Haircut

Your cowlick won’t be making any compromises, so you’ll have to adjust according to it. And if it is quite noticeable, you should consider getting a haircut that complements the cowlick. If you have a cowlick at the hairline, you can consider having spiky hair (fauxhawks) or go for a more messy look.

You can also brush your hair up in the direction of the cowlick or consider a textured hairstyle. Women can get side-swept bangs to hide their cowlicks. It’s best if you talk to your hairdresser about it because they can suggest a suitable hairstyle. If no hairstyle’s working out that well, you can always try the buzzcut.

How To Tell If Cowlick Or Balding?

Because of the location of the cowlick, many people end up confusing it with pattern baldness. However, there are clear differences between the two. You can look out for the following:

If you can see the skin of your scalp in the crown region or along the hairline and your family has a history of pattern baldness, it’s likely that you’re going through the same. Now, it is possible for you to have a cowlick and pattern baldness at the same time. However, in the case of the latter, you’ll notice thinning of the hair.

The scalp will continue to show more and more with time as you lose more and more hair. Eventually, you might barely have any hair in that region. For this, you only need to take a look at the heads of your family members, and you can get a good idea of what it is.

If you only have a cowlick, only that area will look bald(-ish). However, if you’re losing your hair permanently, you’ll notice hair loss from the hairline to the crown regions of the scalp. Your hairline will significantly recede and change shape, and the crown region will also gradually lose most of the hair. Eventually, the whole top of the head becomes bald. The cowlick will become less and less noticeable because you’ll lose those hairs too.

Since pattern hair loss can take place gradually, it’s not always clear whether or not you’re losing hair. To be sure, you can consider asking your close friends and family members about your hair changes. Additionally, you can look at your before and after photos to see if your hair is just maturing or you’re losing it.

One of the best ways to clear up any confusion is to consult a dermatologist. You should especially do that if you’re experiencing active hair loss or shedding. It could be due to pattern baldness or some hair product that you’re using for your cowlick.

For instance, some people use dry shampoo to settle their cowlick. However, using too much dry shampoo can cause hair loss, too, as it can overly dry the scalp and clog the pores. So, it is possible that you’re balding in the crown region because of this and not pattern baldness. To get an accurate diagnosis, make sure to consult a medical professional. They will ask for your family and medical history, require some blood tests, and do physical exams to determine what’s causing your hair loss.

A cowlick can be a nuisance because it can ruin any hairstyle that you’re trying to make. The cowlick hair seems to have a will of its own. However, there are things that you can do to make it less noticeable.

You can wear certain hairstyles and use hair products to hold the cowlick in place. It is also possible to undergo a hair transplant to change the direction of hair growth. And if you’re confused between pattern baldness and cowlick, it’s best to consult a trichologist or dermatologist for an accurate diagnosis.