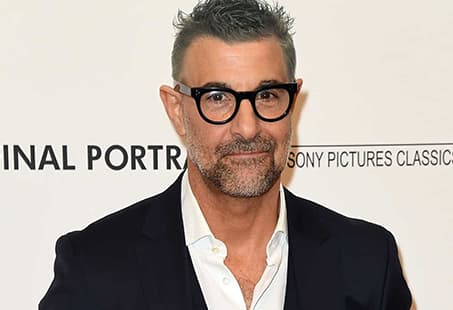 Bald is the new sexy, thanks to many Hollywood icons. Actors like Dwayne “The Rock Johnson”, Samuel L. Jackson, Jason Statham, Stanley Tucci, and Bruce Willis, among many others, have a certain je ne sais quoi that charms everyone. And this may have something to do with them being bald. For some, it was a choice, while others had it with their pattern baldness and decided to ditch their toupees and bad comb-overs once and for all.

While many actors have decided to own their shiny, bald dome and make it their iconic feature, we, at Longevita Hair Transplant, couldn’t help but wonder how some of these actors would look with hair. Would they still look like the sex symbols that they are, or would hair actually take away from their charismatic appeal? To answer that question, we gave a full head of hair to 4 famously bald actors based on their age, skin complexion and head shape, and the results were surprising.

Bald, bespectacled, and lean-muscled, Stanley Tucci is the icon of the zaddy-culture. From playing the supportive husband opposite Meryl Streep in Julie & Julia, fabulously gay editor Nigel in Devil Wears Prada to a creepy paedophile-murderer in The Lovely Bones, this character actor is known for his versatility. Even though he’s usually playing a supporting role, he manages to steal the spotlight.

It’s hard to imagine him being anything but bald, but he looks no less charismatic with a full head of hair. While the actor is now in his 60s, with hair, he could easily pass for someone who’s just entered his 50s. With short hair and a slightly messy side part, he still looks smolderingly charismatic.

The actor wasn’t always bald. You can see his natural hair in a 1980s Levi’s commercial where he appears ripped in a tank top. There’s also the famous picture of him looking like Freddy Mercury. However, after losing a lot of hair to pattern baldness, the actor simply decided to go bald completely. While that’s worked out well for him, he would look just as good if he had his hair.

The larger-than-life Hollywood’s bald, hunky action star Vin Diesel is known for his roles in the Fast & Furious and The Chronicles of Riddick franchises. It’s hard to miss his tough-guy swagger and hard-man image, which is only amplified by his bare head. And while he has been seen with his natural hair when he was young (looking eerily like Drake) and even wigs in some films like Find Me Guilty and The Last Witchunter, we can’t help but wonder how his natural hair would look had he not shaved it.

Due to pattern baldness, his hairline receded in an “M” shape, as can be seen from the black follicles that dot his shaved head. However, had he not shaved his head so early on and left his hair to grow, he would’ve been seen with sharp Mohican hair, kind of what he looked like in The Last Witch Hunter, but with much shorter hair that’s also grown on the sides. With that hair, he could easily pass for someone who’s in his 40s, even though the actor is now 54 years old.

Known for playing Professor Charles Xavier in the X-Men franchise and Captain Jean-Luc Picard of the starship USS Enterprise, being bald is the trademark look of Sir Patrick Stewart. While you can see him with hair in some old BBC productions like I, Claudius and North & South, they were all wigs. Unfortunately, the actor started losing his hair at the age of just 19 and went bare within just a year. While he had a had-comb over for a while and decided to hide his head with caps and hats, he eventually got it all shaved.

However, had Patrick Stewart not suffered from pattern baldness, he would’ve looked no less than a silver fox. With hair, his face looks even more kind and playful. The actor doesn’t look 82 even now, but with hair, he looks like someone in his 60s.

Donning a safari suit, you’ll have seen The Rock fighting supernatural forces in many popular films like Jungle Cruise, Jumanji, and The Mysterious Island, among others. He’s also known for being a bald, hunky action star. However, once, the actor did support a full barnet and even short-trimmed hair. But because, according to The Rock himself, his hair was “a cross between an afro and hair from a Lama’s ball sac,” he decided to shave it all off.

Although if the former WWE star had more manageable hair, he would have looked just as dashing, maybe even more. Even with a wide forehead, his hair lifted slightly at the front makes him look younger than he is. And he continues to ooze machismo with that million-dollar smile.

Even though they once had hair, many Hollywood icons have made their shiny domes their trademark look. They are so well known for their baldness that it’s hard to imagine them any other way. It is undeniable, however, that having hair would only enhance their charismatic appeal and dashing good looks. A full head of hair even made them look younger, which is something that Hollywood values. But since that’s not happening, these actors can continue to make bald look stylish.